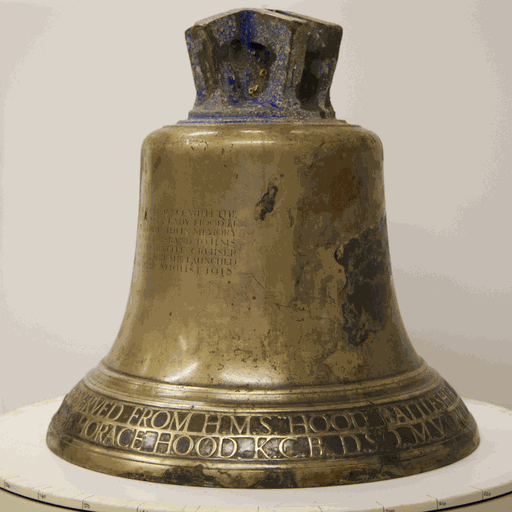 Photo-masking a bell from HMS Hood after conservation

This particular photo-masking application is an experiment as we are attempting to model a bell from HMS Hood after the bell underwent conservation work.

HMS Hood was a British Battle Cruiser that was sunk on 24th May 1941 by the German Battleship Bismarck, during the Battle of the Denmark Strait. In 2001 the wreck was located by Blue Water Recoveries, with the ship’s bell found lying on the seabed, away from the hull. In August 2015, Paul G. Allen (co-founder of Microsoft) led an expedition supported by Blue Water Recoveries to retrieve the bell and, soon afterwards, the bell was sent to Mary Rose Archaeological Services for conservation. The bell was presented to the HMS Hood when she was launched, in 1918, by the widow of Rear-Admiral Sir Horace Hood, great-great grandson of Sir Samuel Hood, after whom the ship was named. Sir Horace died at the Battle of Jutland on 31 May 1916, one of 1,026 officers and men who died in seconds when the battlecruiser HMS Invincible blew up and sank, and the bell is inscribed to that effect. The bell of the HMS Hood is now on display in the new exhibition '36 Hours: Jutland 1916, The Battle That Won The War', at the National Museum of the Royal Navy, in Portsmouth Historic Dockyard. The bell has been installed as a memorial to the 1,415 men who lost their lives when the ship sank in 1941. These photos of the bell post-conservation show the condition the bell was in just before it was put on display within the '36 Hours' exhibition. Only the outside of the bell was photographed.