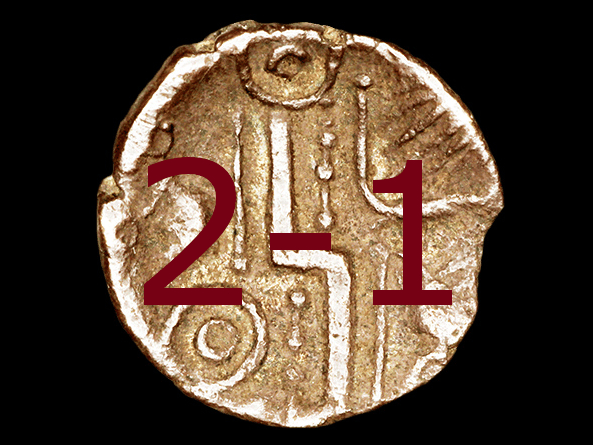 The Iron Age in Britain was a period of profound social and economic change: regional politics and community identities were in flux, links to continental Europe were becoming increasingly profound and large parts of England embraced a key new economic and social medium: gold and silver coins. These so-called Celtic coins projected to their users an ornate imagery and complex designs. Each coin was made by striking a blank metal pellet between two engraved metal ‘dies’, and each die was replaced independently as it wore out. In this mundane detail however lies enormous insight: it turns out that by identifying the dies used to strike each coin, it is possible to establish long ‘chains’ or sequences of dies that not only reveal how imagery changed over time, but more importantly produce a remarkably fine-grained chronology that can radically change our perception of life in the Late Iron Age.

Through this MicroPasts project, you can participate in a die-study of coinage from the British Southwest. While ‘Durotriges' is a later Roman label for a tribe in this area, it may hark back to the communities centred on Dorset in the later Iron Age who produced large quantities of coinage, much of which has never been examined in detail. We will use data from the Celtic Coin Index (CCI), the premier collection of records on late Iron Age coins from Britain [https://ccid.web.ox.ac.uk, to undertake this study. Thanks also to the Trustees of the British Museum and Chris Rudd who also provided coin images.