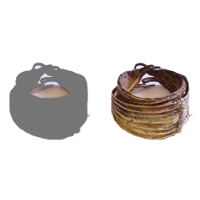 This particular photo-masking application is dedicated to one set (Set B) from a hoard of Bronze Age goldwork from Woolaston, Gloucestershire. A hoard is an archaeological term for a group of valuable objects that have been buried in the ground together, often seemingly with the intention of later being recovered by its owners. This particular hoard includes gold ornaments found together in nested bundles in a pit deposit near Woolaston, close to the River Severn and the English-Welsh border. The ornaments, which probably date to the Middle Bronze Age, may have been worn as bracelets by a child or infant, due to their small circumferences.