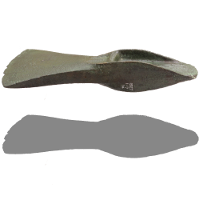 This particular photo-masking application is looking at twelve Bronze Age palstaves found in the Burley hoard, Hampshire, discovered in 1927 in a rabbit burrow.

The Hoard is composed of eleven nearly identical palstaves belonging to Class 1 Group 5a, a Hampshire variant of the developed shield pattern palstaves. These particular artefacts are thought to be cast from the same pattern but not necessarily the same mould. The 3D models generated using the masks will be used to verify the level of similarity between the objects. If the palstaves were cast in a number of clay moulds using the same blank we would expect a higher degree of shape variation than if they were produced in a stone mould. Palstave 1927, 0107.2 is typologically different to the rest of the hoard. It is an early shield pattern palstave which is an older type, however its inclusion suggests a typological link between the early and developed shield pattern palstaves.