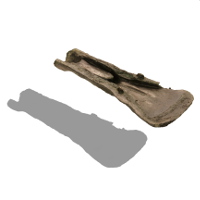 This particular photo-masking application is looking at one half of a bronze mould used for casting palstaves. Its other half is broken into two pieces. A 3D model of the mould will allow us to extract the shape of the palstave which can then be compared to the already modeled axes in a hope of finding a match.