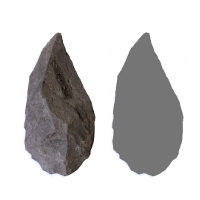 This particular photo-masking application is dedicated to two handaxes housed temporarily at UCL Institute of Archaeology. These handaxes correspond to the Acheulean period (i.e. the age of the handaxe, which spans between 1.7 and 0.2 myr) at Olduvai Gorge, Tanzania. One is made of lava and the other of quartzite, and were discovered by the Olduvai Geochronology Archaeology Project (OGAP) from eroding outcrops in Olduvai Bed II, where the Acheulean age began around 1.5 myr ago.

We would like people to draw a polygon around the handaxe that they see in each photograph in order to identify its outline and exclude the image background. This allows the 3D modelling process to concentrate on the object itself and ignore irrelevant background information.