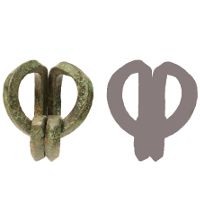 This particular photo-masking application is dedicated to Sussex Loop ‘bracelets’ of Middle Bronze Age date (c.1500-1100 BC). These examples were found around 1896. They were said to be found at a depth of 5 ft (c.1.5m) about one mile south east of Hollingbury Castle, Sussex. If the depth is correct they were possibly found in a chalk-cut pit. Sussex Loops are so called because the majority have been found within a 16 mile radius of Brighton in Sussex. They are a distinctive bracelet type that forms part of a much wider distribution of ornaments found in Southern England during this period. They probably relate to a particular regional identity. The fact that they are often deposited in pairs suggests they were worn on each arm but the evidence for ornaments of this period is primarily from hoard deposits rather than graves so it is not possibly to be confident regarding how they were worn.