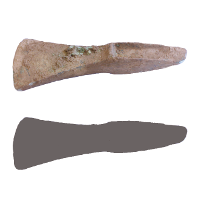 This particular photo-masking application is dedicated to a hoard found in Lower Hardres, Canterbury. A hoard is an archaeological term for a group of valuable objects that have been buried in the ground together, often seemingly with the intention of later being recovered by its owners. This particular hoard includes five Bronze Age palstaves.

We would like people to draw a polygon around the palstave that they see in each photograph in order to identify its outline and exclude the image background. This allows the 3D modelling process to concentrate on the object itself and ignore irrelevant background information.