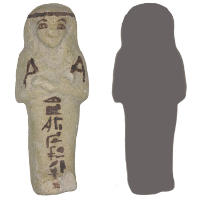 This particular photo-masking application is dedicated to one object hosted by UCL Petrie Museum - an Egyptian funerary figure, also known as a shabti. This small mould-made pale green faience shabti is inscribed with the name of the owner, Djed-khonsu-iwf-ankh. The standing figure is mummy-like in shape and wears a wig with a filet tied in the back. Shabtis like this one were made to carry out any tasks, particularly agricultural chores, that the deceased might be asked to do in the afterlife. For this reason, he carries a hoe in each hand and has a basket slung over his shoulder. The figure was probably found at Abydos and dates to the 22nd Dynasty (946/45 - about 735 BC). This is one of a group of 13 similar shabtis in the museum belonging to this individual although other examples from this group are also in other museums.

We would like people to draw a polygon around the shabti that they see in each photograph in order to identify its outline and exclude the image background. This allows the 3D modelling process to concentrate on the object itself and ignore irrelevant background information.

If you are interested in what a 3D completed model looks like, please have a look at the example here for a MicroPasts palstave model, or here for a similar shabti model.