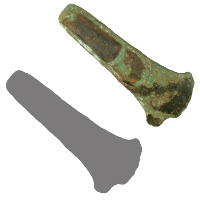 This application is on behalf of the West Midlands Portable Antiquities Scheme team and the full records for the objects can be found here: