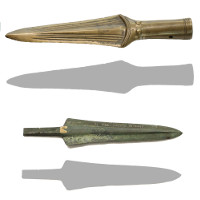 Photo Masking the Arreton Down hoard

This application enables the creation of high quality 3d models of archaeological artefacts via process known as photo-masking. There has been a revolution in 3d modelling in recent years and it is now relatively easy to construct such models from ordinary digital photographs. Isolating the objects depicted in these photographs, and masking out the background, is an important first step to achieving high quality results. The final 3d models will be made publicly available and are useful not only for basic documentation purposes, but also for graphical displays in museums, for inclusion in gaming and virtual reality environments, or for identifing different sub-styles in otherwise similar types of artefact (that might tell us about the date of the artefact, where it was made, or by whom).

This particular photo-masking application is a bit of a 'pop-up shop' because we only mean for it to deal with one Bronze Age British hoard that the British Museum wants to model now rather than later (a hoard is an archaeological term for a group of valuable objects that have been buried in the ground together, often seemingly with the intention of later being recovered by its owners). This particular hoard was found on Arreton Down on the Isle of Wight sometime before 1735. It constitutes a major group of Early Bronze Age spearheads and axes (as well as at least one dagger) that was probably placed in the ground around 1700-1500 BC.

We would like people to draw one or more polygons around the artefact that they see in each photograph in order to identify its outline and exclude the image background. This allows the 3d modelling process to concentrate on the object itself and ignore irrelevant background information.

If you are interested in what a 3d completed model looks like, please have a look at the example here.